When I reached my 34th week, my OB required me to come in for a check-up every week. I usually go every Wednesday but on my 37th week, call it Mother's instinct, I decided to come in on Monday. In the car Jim and i were even debating on what's a good date to give birth. July 4 was the frontrunner because that way he would share the same date with both the kids.

Anyway, i dropped him off at work and went to Makati Med for my checkup. There was a line at my OB's clinic so i had to wait. When my turn came, my OB praised me for  not gaining any more weight (yaaay me!) but i kept complaining how heavy i felt and telling her how i cant wait to give birth soon. She asked me to lie down so she can check up how dilated i am. Lo and behold she declared, "Okay, you're 4-5 cm dilated. After this checkup, go straight to the labor room. You will give birth today."

Me being me, the first thing that came out of my mouth was, "What?? But i didn't do my hair today doc! And i didn't do my makeup!". My OB looked at me and laughed saying that I'm really her funniest patient. But i wasn't being funny. I was serious. I had plans (my friends knew this) of contouring my face and doing some highlighting. I even practiced beforehand. Oh well. Down the drain that went.

So i then called my driver to go back home and get my prepacked hospital bag. Then i called Jim. Good thing he didn't panic this time although he kept asking if i was really sure. We decided to meet in the hospital lobby before going to the Labor Room. I didn't know how long my labor would take so i decided to get food and eat. Funny thing, while i was happily eating and waiting for Jim, a guy beside me asked when i was going to give birth. I looked at him, smiled and said, "oh in a few hours". He was surprised and said that i looked awfully calm. I guess since it's my second one, i was less nervous.

So finally, Jim arrived and we headed straight to the Labor Room. Once there, the nurses assisted me to one of the rooms while Jim was asked to do the necessary arrangements. They had me change into hospital robes and asked me to, uhm, do an enema which was icky but necessary. They then hooked me up to the monitors and asked me to lie down and rest.

I was in the room for an hour or two when Jim came in. My contractions weren't that strong yet so i was able to nap a few times. At about 3 pm, an OB came in to do an internal exam. She also broke my waterbag and gave me Buscopan which helped progress my labor even more. After an hour, I was already 6cm dilated. Shortly after, the anesthesiologist came in to prep me for the epidural. At this time, my contractions were getting stronger and more frequent so the epidural was very much welcome.

My OB came in at about 6 pm. She checked me and i was already about 8 cm dilated but the baby's head was still very high. So we waited. She never left our side. Jim was getting nervous because he felt that having the OB there must mean that there's something wrong. But the baby's heart monitor indicated that he wasn't in distress.

7:30 pm. The contractions were stronger. So much so that i felt the pain even after i was given some epidural. They did another IE and my OB finally said that it's time to deliver. I was wheeled to the Delivery Room. They then prepped me. I was hooked to different monitors and was given more epidural. My OB gave me instructions on how to push and started coaching me.

Here we go. I pushed thrice. But the baby's head kept going back in. One of the doctors stood up and placed her arms on my tummy to help me push. I was told to push one more time with all my strength. I did as she said, i pushed as hard as i can and a few seconds after, the baby's head was out. My OB then saw that his umbilical cord was wrapped around his neck that's why they had a hard time getting him out. They quickly cut it and he was placed on my chest.  I kept on kissing him and telling him i love him. My son.

Hunter  was born at exactly 8 pm. He weighed 7 pounds 8 ounces and was 22 inches long. He was perfect. And he looked like his dad.

When everything has calmed down a bit, my OB told me that had i not been able to push him out, she would've called for an emergency C-section. I was very thankful that it didn't come to that.

We were moved to the Recovery Room. Jim left us to prepare the room where we will be staying in after. So apart from some of the nurses and doctors, Hunter and i were left alone. It gave me time to look at my son and i couldn't help but smile. I just wanted to cuddle and kiss him.

An hour later his pediatrician came in and did some tests. She saw several birthmarks but all in all she declared him to be in perfect health.

We were then moved to our hospital room where Jim was waiting for us. I smiled. He smiled. We are now a family of four.

So my good friend Jacs  suggested that i start this blog with my children's birth stories. As i try to recall the moments leading to the birth of my kids, i cant help but chuckle. Let me start with my daughter.

It was around 11 pm when i felt my waterbag break.. I didn't get that dramatic giant gush of water (like that in the movies) but rather a slow trickle.  I wasn't really sure at first so i waited an hour or so
before i told Jim. As soon as i did, he stood up, dressed hurriedly, looked for our hospital bag and headed straight for the door. Instead of going with him, i went to our washroom and proceeded to do my makeup and curl my hair. My darling husband couldn't believe what i was doing. I was fat and swollen but ill be damned if ill look ugly.Yes I'm a bit vain but hey, it paid off. I looked semi-decent in my delivery room and post birth photos.

Anyway, after i was satisfied with how i looked we then went to the hospital. We chose The Medical City because it was near  and it looked modern AND clean. We went to the emergency room and a nurse brought me to the labor room. A doctor did  an internal exam and found that i was 5 cm dilated already. (Sidenote: Having an Internal Exam is like having menstrual cramps multiplied by 20. It was one of the most painful experiences ever.)

I was then wheeled to a bed and two types of monitors were strapped to my tummy.One to check the strength of contractions and the other to monitor the baby's heart rate. I was told to relax, get some rest and tell them when i cant bear the pain anymore so they'll give me an epidural. Yes, i did ask for one eventually. Not gonna lie, no matter how high my pain tolerance was, at the very end, it was painful as hell. It felt like being sucker punched every 10 seconds. It was a good thing Jim was there with me because i don't know how i could've survived it. The moment the epidural kicked in, i felt instant relief.

They gave me Pitocin to speed up my contractions and at around 8 am, they decided i was finally dilated enough. They wheeled me to the Delivery Room where my OB was waiting for me. There were about 8 people in the room and normally i would just die if anyone sees my private parts, but when you are in pain all sense of  shame goes out the window. So there i was, lying down with my legs wide open and my OB calmly coaching me through the whole process.. I did as i was told and on the fifth push, she said she was going to use forceps to help the baby come out. I got a tiny bit distracted when i saw my husband taking lots of photos. Again, vain person that i was, I told him to shoot the photos from my good angle.


My OB told me to push one more time and out came my River. As soon as Jim cut her cord, she was immediately placed on my chest. Nothing could have prepared me for the sudden rush of happiness and love i felt for my baby.


It was an incredible feeling. She was so soft and warm and even though she was still covered in that white film, she smelled so good.  I looked at Jim and i could'nt stop smiling. The three of us were finally together.


Jim kissed the top of her head and it was just so beautiful. I tried to keep her on my chest as long as i can. She latched on beautifully. Our first breastfeeding. Unang Yakap. It all came so naturally. I cant help but think that i was made for this.

My little girl was born at 9:11 am. She weighed 6 pounds 4 ounces and measured 22 inches long. she scored 9.9 on her APGAR test. She was healthy, beautiful and well, looked like her dad. I labored for about 7 hours and pushed for less than 15 minutes. My OB, Dr Annebelle Aherrera was amazing. The nurses were the best. They made me feel extremely confident in myself and my ability to give birth to my baby. I could not have asked for more.

They whisked us to the Recovery Room but not before attaching bands on me and my River. They called it Hugs and Kisses and it alarms the hospital if mom and baby are more than 300m away from each other. After an hour there, we were eventually moved to our room and left to settle in with our baby. I spent most of the time just holding her, breastfeeding her and gazing at her with amazement. And changing her diaper..


Finally I'm a mother. The most important job in the world was mine. 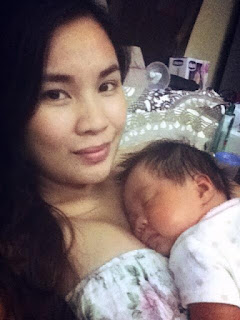